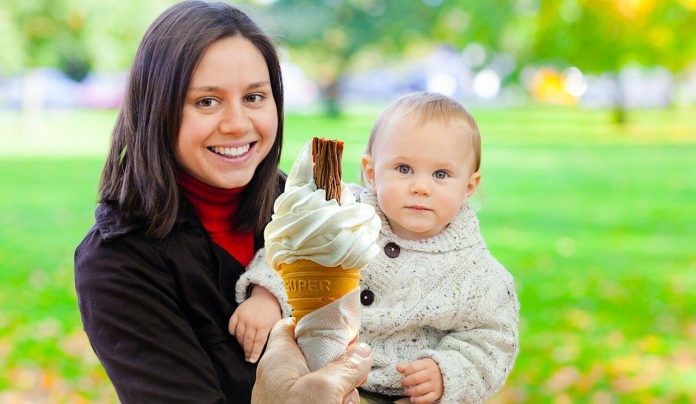 Parenting is a challenge itself whether it is for the first time or for the nth time. You might come up with new and different tasks every day. Seeing your toddler grow and learn new habits is one of the most pleasant things to experience. However, you must have an owl’s eye when your toddler learns to walk and starts eating. Out of all, Ice creams are the most loved junk food for babies despite being forbidden.  You cannot give it to them or stop them either. Therefore before introducing it is better to know when can babies have Ice cream and what are the main commodities parents need to keep in mind.

Unlike adults, babies have a very sensitive gastrointestinal tract (GIT) which tends to digest and absorb only a few substances. Ice creams consist of certain elements that are fairly impossible for babies to assimilate. For instance, if you give them, there are possibilities that your baby might start throwing up and can suffer from diarrhea which in turn is a harmful condition. However, as they approach towards one year of age their GI system matures too.

Since Ice creams are available in variable colors they are liable to attract babies. Little do they know that those colorings can be very hazardous for them. The food color used in Ice creams is composed of chemicals which are not suitable for babies.

As far as babies are concerned their response to cold is comparatively more rapid than adults because of decreased immunity. When toddlers reach the age of one year their immunity becomes stronger and more defensive against cold. Therefore Ice creams are allowed at one year of age.

Babies below the age of one year shouldn’t have Ice creams on their own without being monitored. This is because babies gulp very quickly which can choke their throat and can lead to an inability to breathing.

About 4 out of 10 babies mostly suffer from lactose intolerance. Lactose intolerance refers to the inability in babies to digest milk because of the deficiency of an enzyme that breaks down milk. Since milk is the main ingredient in Ice creams, many of the babies are exempted from having it. Lactose intolerance is mostly diagnosed in an earlier stage of life.

There are a couple of parents who have little or no idea regarding any allergies their baby could be suspected with. The ingredients present in a local Ice cream could consist of certain ingredients that can trigger a negative response in your baby that you might not have even noticed before. Allergies are very common in babies below one year of age.

Never forget to check the expiry date mentioned on the Ice creams. The intake of an expired Ice cream can be very poisonous. Babies below one year of age when offered such Ice creams accidentally without checking the expiry date can turn out to be fatal. However, a one-year-old will somehow cope up due with the body’s better defense mechanism.

How Can Parents Know That When Can They Give Ice Creams To Their Babies?

A lot of parents are concerned regarding the right time for introducing Ice creams to their babies but only a few know the ideal time.

As soon as a toddler starts weaning, new or even old mothers think that their baby can have anything soft which is wrong. Weaning only alters the breastfeeding patterns and allows the mother to introduce a soft yet mild diet.  As the baby passes the weaning age and starts to take chewable food, it is then considered safe to give Ice creams to them. This usually takes place around one to two years of age.

Medical studies and researches have said that at about one year of age a baby develops all that is required to digest a heavy diet which includes Ice-creams as well.

How Can You Avoid Ice Creams For Babies Under One Year Of Age?

What is the hardest part of parenting? Well, it is to refrain your toddler from eating something he loves the most. To keep your baby away from Ice creams you need to have control over yourself first. Babies are programmed with the fact that anything eaten in front of them should automatically be given to them. Therefore, the next time you crave that Ice cream at midnight keeps in mind to eat it miles away from your baby.

If you notice that your toddler is becoming cranky when not been fulfilled with his/her ice cream desires, then replace it with something healthier. The key to such a thing is to prepare something colorful and attractive. This way your baby will find it more approachable. Purees and flavored yogurts work best in such conditions. They are nutritious and resemble Ice creams to some extent.

How Can You Introduce Ice Cream To Your Baby?

If you are a new parent, every little thing your baby starts to learn excites you limitlessly. The first time your baby latched, the first meal he/she had in a lifetime, the first steps he/she took are al those phases which you can never tend to forget. Experts have suggested that Ice creams when given in the first year of life is generally safe. However, there are certain ways to give it to your toddler to avoid any setback.

Cup Ice creams should be given more preference over bars as babies tend to create a huge mess and no mother would like to clean it every second!

Ice creams with nuts and chocolate chips are strictly prohibited as babies are at risk of getting choked. The reason being so is because of the sensitive nature of their larynx, unlike adults.

A soft rubbery spoon is ideally used to scoop out the Ice cream as babies have very sensitive gums. This is why it recommended giving Ice creams to babies who are one year old as their gums are less sensitive than those below.

What Are The Adverse Effects Of Giving Ice Creams To Underage Babies?

Giving any junk food, Ice cream specifically to your toddler without knowing the side effects can have a very negative impact on their health. First and foremost they can develop an inability in digesting due to the presence of heavy ingredients that are not lighter on their tummy.

Secondly, having Ice creams or any similar dessert can lead to a disease called Diabetes Mellitus type 2 which is very common in children as a result of high sugar content intake.

Babies who are 1 year or above are legalized for cow milk and Ice Creams sold in the name of fresh milk content are hence a big No for babies below one year of age.

A happy and loving parent would always want to give everything his/her child desires but certain guidelines are required to prevent any event which one never wants in the first place. Studies have suggested that new parents are more successful as compared to older ones as they are more cautious when it comes to parenting.

It is no harm in bribing your toddler with Ice cream in return for eating their meal, but you need to have patience and bear it till your baby turns one.

Most importantly, if you have offered your baby an Ice cream and you notice a different or unusual behavior report to your child’s pediatrician immediately. There are many cases reported which illustrate that because of the negligence of some parents many babies had faced severe health issues.

So dear moms wait till your baby’s first birthday and then offer him that chocolate Ice cream he had been longing for! Ignore the mess that he/she will create because it’s his happiness that matters after all.

Hey! I work as a pregnancy and parenting expert in Pakistan. I am well versed in describing and highlighting the issues new and old parents need to deal with. I am using this platform to answer queries related to babies and toddlers because I being a mom and an expert have a lot of experience in this area. Many new parents as well as those who are single often seek assistance from sites and blogs and this is where you can get the right information from.

My vast knowledge will address some of the major issues parents encounter such as feeding, objects and toys for kids, upbringing, meal plans, sleeping suggestions etc. Apart from that my medical background as dentist would be of great help for general and oral health issues you often come across. Have a look over my blog and feel free to ask any query you come up with. It will be an honor for me!

Symptoms Of Worms In Kids And Their Behavior

How To Remove Slime From Hair

How Long Does It Take To Learn Swim?

Difference Between Daycare and Preschool

How to Get Boogers Out of Baby’s Nose?

ABOUT US
Mom Voyage is a participant in the Amazon Services LLC Associates Program, an affiliate advertising program designed to provide a means for sites to earn advertising fees by advertising and linking to Amazon.com. As an Amazon Associate we earn from qualifying purchases.

All information found on mom-voyage.com is intended for informational and educational purposes only. The information provided on this website is not intended to be a replacement or substitute for professional medical advice.
Contact us: hello@mom-voyage.com
FOLLOW US
© All Rights Reserved By Mom Voyage.